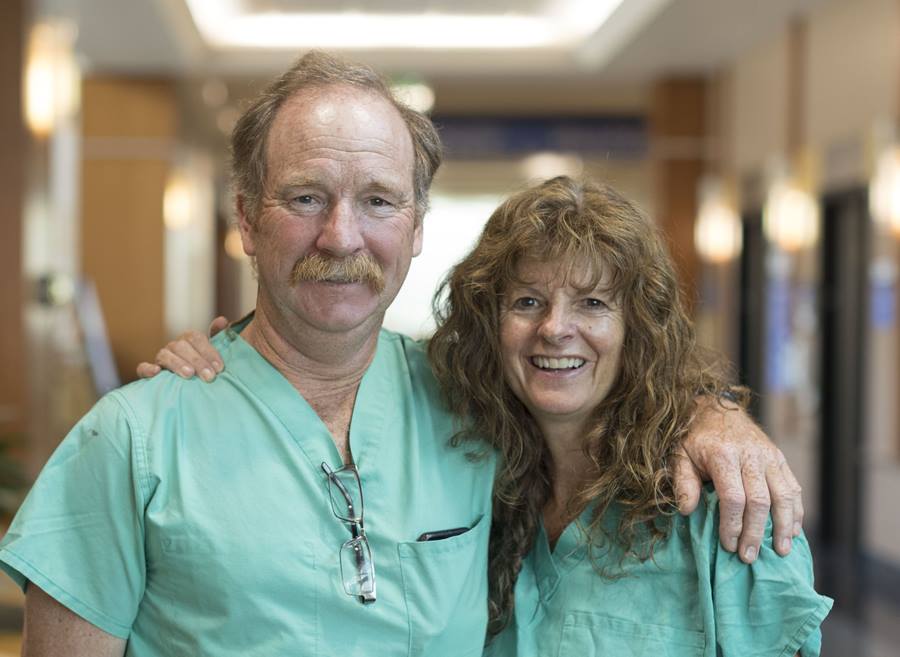 For more than 30 years, husband and wife doctors, Brian Smith, MD, and Karen Bossler, MD, have shared their lives and their work inside the emergency department at McKay-Dee Hospital. And while many would shy away from working with their spouse day after day, Karen and Brian say they’re stronger and able to deliver better care because of it.

Brian Smith, MD: In 1986 I met Karen in the cafeteria when she came to interview.

Karen Bossler, MD: I just remember you coming in all happy and boisterous and talking about kayaking or biking and being really alive and strong.

Dr. Smith: I guess it hasn't changed. Right when I saw her, I said, “She is smart, athletic, and good-looking and into the same things that I'm into: skiing, biking, and delivering good, quality medicine.” So yeah, it was immediate.

Dr. Bossler: After my first year, we became romantically involved, and we became partners. It was called Wasatch Emergency Physicians then. It's our own practice. They asked you to work.

Dr. Smith: Well, they asked me to work, thinking that they would get you then. Because they really didn't want me to work. They wanted you to.

Dr. Bossler: So, we've shared a job ever since.

Dr. Smith: Being married to each other, we have no roadblocks to asking each other questions to try to solve a complicated patient problem.

Dr. Bossler: It's easy for us, being married and having the same occupation. We kind of realize what the other person's been going through.

Dr. Smith: We know how important sleep is, and we don't ever bother the other person if they're sleeping, regardless of the time of day it is.

Dr. Bossler: A lot of times, the nurses expect that I'll know exactly what Brian thought. When he's off seeing another patient and they have a question, the nurses always come to me. Now, what do you think Brian thought? And I'll say, “Well, I don't know what he thought.”

Dr. Smith: Well, most of the time you know, though. Occasionally, the husband and wife thing plays itself out. Like the time you saw the guy who wanted drugs from you.

Dr. Bossler: He came in asking for pain meds because he had a broken arm, and I found out he had just gotten a prescription from the orthopedic doctor. So I told the patient, “I'm not giving you narcotics. You have enough.”

Dr. Smith: Then, he left and came back the next day. I saw the chart, that Karen saw him, and then I went in and just asked him, “What's going on?” He started going on and on about seeing this bitch. This woman wouldn't give him any pain meds and he needs to see a real doctor, a guy. I said, “Well, here's the deal. You were lying to her. You're lying to me. And the bitch doctor's my wife. You can either get up and leave right now, or I'll just call the police and have you arrested.” So, he got out of there really quickly.

Dr. Bossler: For our first 10 years, we didn't have kids, so we’d pick a lot of the holidays and weekends.

Dr. Smith: I remember the Y2K holiday, when the world was gonna come to an end. We both said, “Well, we'll work the Y2K.” We thought it was just going to be crazy, so they had all this extra help in there. And then midnight came along, and there was a total of one person in the emergency room. He was having a heart attack, well, he was stable. He got a hat and one of those little things you blow for New Year's Eve festivities.

Dr. Bossler: We celebrated Y2K with him.

Dr. Smith: He loved it. Most people think that there's no way I could work with my spouse. I think it's just the opposite in our situation. Because we work together, we have more mutual respect for each other's job. We're closer, made us stronger because of it, and I think we are able to deliver better care because we're there together.

Dr. Bossler: I think it’s worked out for the best.