People with diabetes or prediabetes are usually told to be on a “consistent carbohydrate diet.” It used to be called a “diabetic diet,” but over the years we’ve learned that there are better ways to manage our blood sugar levels than by just cutting out sugar and sweets. When we say “consistent carb” we mean that all of our meals have about the same amount of carbohydrate, or “carbs,” because we know that the carbs we eat have the most impact on our blood sugar levels. If we keep the amount even throughout the day, our blood sugar gradually rises and falls instead of having big spikes and then going really low.

Carbs are in foods such as bread, pasta, fruit, milk, candy, potatoes, rice and yogurt. Our bodies turn carbs into energy so they’re important to get, and they are often in foods that are healthy and give us a lot of nutrients. We measure the amount of carbohydrate in grams (g). The amount of carbohydrate that we need depends on age, sex, activity level and whether you’re trying to lose weight. Most women need to have 30-45g of carbs per meal and men need about 60-75g.

So how do you know if you’re getting the right amount? Here are some foods and their carbohydrate content:

You can also read food labels. Check the serving size and then see how many carbs are in one serving. If you want to learn more, you can make an appointment with a Registered Dietitian. 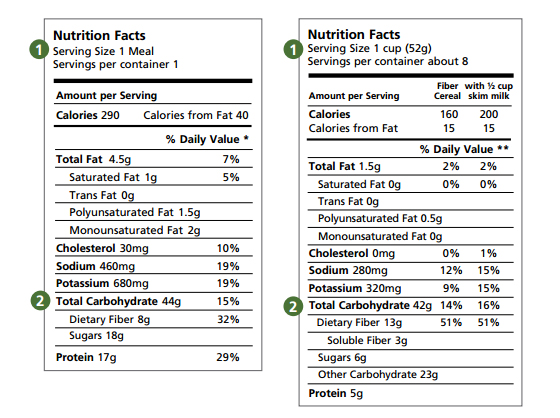