April is National Donate Life Month and this year Primary Children’s has many reasons to celebrate, including the hospital’s first split-liver transplant to benefit two Primary Children’s patients – an infant and a teen – at once. Two-year-old Brycen McKen and 15-year-old Sophie Hansen both received halves of the same liver on New Year’s Eve, 2017.

“On December 30, 2017, we got the call saying that a liver was available for Brycen. The transplant the next day was a New Year’s Eve miracle,” says Brycen’s mom, Shayli. “We had much hope and gratitude, but we also had such mixed emotions, for a family that had tragically lost a child. It was amazing to us that in that time of immense sorrow and grief that they would have the love and generosity to think of others."

"If you were to look at Brycen now, you’d never know the story behind his sweet, smiling face,” Shayli says. “He quickly got rid of his feeding tube. He went from eating nothing by mouth to eating everything he can get his hands on. His sisters call him the ‘eater monster.’ He is full of energy from the time he wakes up to the moment he goes to bed.” 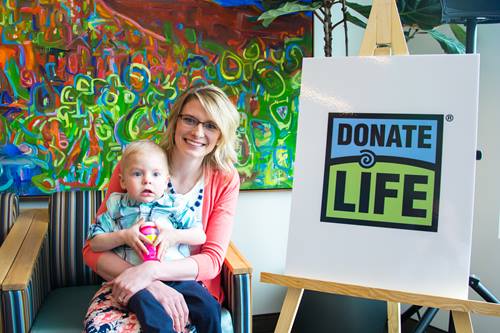 Sophie, who recently went to Europe with her family for spring break, shared her story in a video message:

“I was super excited to be told that the liver would be shared with another kid at Primary Children’s. I think this is really cool because one organ is able to save two lives,” Sophie says in the video. “I’m so thankful to the person that decided to say yes to organ donation because they were able to save my life and another person’s life.”

A Record-Breaking Year for a Top Transplant Program

Brycen and Sophie’s surgeries were part of a record-breaking year for the Primary Children’s Liver Transplant program. The record 20 pediatric liver transplants completed in 2017 elevated the program to a No. 9 ranking in the U.S. for number of transplants performed and No. 2 in the West.

Primary Children’s Hospital patients and families joined the hospital’s Liver Transplant team on April 4 to celebrate the milestone and honor those donors who made these life-saving transplants possible. Dr. Linda Book, who works for University of Utah School of Medicine and is the Medical Director of the Pediatric Liver Disease and Transplant Program at Primary Children's Hospital, and Dr. Manuel Rodriguez-Davalos, Surgical Director of Pediatric Liver Transplantation at Primary Children's Hospital, spoke about the milestone at the celebration.

“It is a big deal,” says Dr. Book. “There are fewer than 500 liver transplants performed on children every year in this country, and Primary Children’s performed 20 of them … More importantly ... we stand with the very best of all programs in (terms of) outcomes of how well our children are doing. They're going back to normal lives of school and playing and being healthy babies, children and toddlers, and it's so heartwarming to see that change."

“We have one of the best transplant teams in the country,” says Dr. Rodriguez. “When I see all the people that are here in the room … I think that we are more of a transplant family, a family that comes together for our patients.” 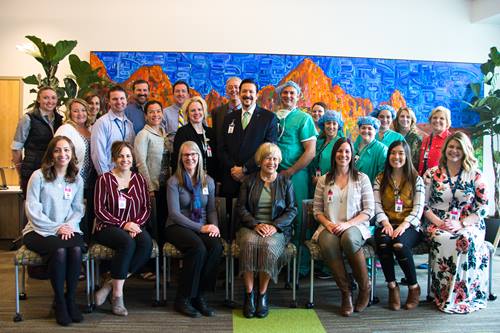 Shayli and Brycen were in attendance at the celebration where she expressed thanks for the caregivers at Primary Children’s for helping give her son a new chance at life.

“We are so grateful for the love and expertise of the Liver Team here at Primary Children’s. None of this would be possible without them,” Shayli says. “But ultimately, we are grateful for the decision of a donor family to help others in the midst of their terrible grief. They will forever be in our thoughts and prayers because of their choice to Donate Life.”

For more, check out media coverage of the celebration from KSL, ABC4, Fox 13, KUTV, Univision and Deseret News.