SCL Health Saltzer Health Intermountain Nevada My Health +
Janet Frank Apr 5, 2021
After decades of planning, two and a half years of construction, and a six month delay because of the COVID-19 pandemic, Intermountain Spanish Fork Hospital officially opened at 6 a.m. Monday, April 5.
Play 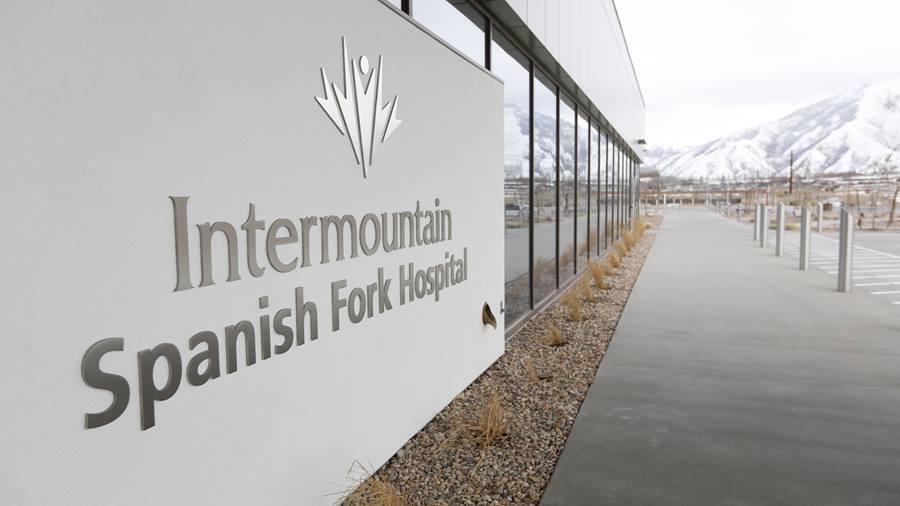 Caregivers gathered for a team picture, then some watched as the countdown clock reached 0:00:00 and others cheered as the building signs turned on. Patient care started within the hour with the first mom arriving for her scheduled induction at about 6:45 a.m. The hospital’s first Emergency Department patient arrived by ambulance at 7:59 a.m.

“It’s awesome to have our caregivers here and to see their faces light up and know they’re part of something that will never close,” says Francis Gibson, hospital administrator. “We’ll be here 24/7, 365 days a year, and they’ll be part of it.”

Intermountain has owned land for a hospital in Spanish Fork for more than two decades. The groundbreaking for the 33-bed facility took place in August of 2018. The original opening date was planned for October of 2020, but that was delayed because of multiple factors including the pandemic.

Francis was named administrator just before the groundbreaking, and he says his goal has always been to build the best care team possible. He and the other hospital leaders, including Nurse Administrator Megan Johnson and Medical Director Cameron Symonds, MD, say the caregivers are what will make Spanish Fork Hospital unique.

“I met the president of the local United Way here last week to give him a tour, and he walked around for a few minutes before I connected with him,” Francis says. “Later, we stopped by Imaging and he told all the caregivers there how he could already feel the personality of the hospital, that it was already tangible. For him to validate what I’ve been saying for two and a half years, it was hard not to cry. I told the team they’re the reason that happens.”

Francis gives much of the credit for the successful opening to Patrick Lemmon, the operational project manager. Patrick’s attention to detail and ability to keep people on task and united have propelled the project forward to completion. Megan’s leadership style has made it easy to attract top notch caregivers.

“She’s the heart and soul of this hospital,” Francis says. “She’s an excellent listener and truly compassionate. People naturally gravitate to her as a leader.”

Megan says she got a little emotional watching the first ambulance drive in. Megan used to work at Orem Community Hospital, but she felt a special affinity to the new facility in Spanish Fork.

“There’s something about the pride and ownership you feel opening a hospital in your community,” she says. “I drove every day to Orem and it’s a great place, but Spanish Fork is my community. After all this hard work, all the hours, and the delay—to be at this point is surreal.”

Clinical shared leaders started working at the hospital in January and February, and the remaining 200+ caregivers arrived two weeks ago for orientation. Megan says that time has been so important to ensure everyone is prepared to give high quality and safe patient care.

“We’re ready. We can do it. Our caregivers truly care about everyone who comes through these doors. There’s something different when you walk through the doors,” says Megan, who’s lived in Spanish Fork for the past 11 years.

Spanish Fork Mayor Steve Leifson says he’s waited a long time to see the hospital open and provide services to all of south Utah County. The area has experienced tremendous growth over the past few years and needs hospital services in the community.