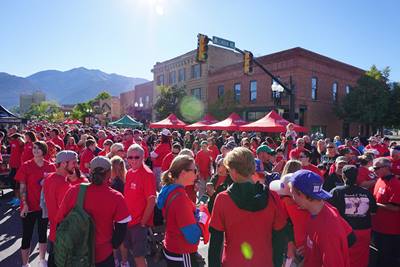 The one-mile walk, held every September, is free and open to the public. Walkers typically include people remembering loved ones lost to suicide, those with family and friends struggling with behavioral health issues, and supporters of the suicide prevention cause.

The event is held in conjunction with Ogden’s Harvest Moon Celebration. It starts at 10:00 a.m. Saturday with an opening ceremony and speaker at the corner of 25th Street and Lincoln Avenue.

Jeremy C. Holm, an author and bobsled athlete, is this year’s keynote speaker. Holm has overcome a number of obstacles throughout his life, including anxiety and depression. In addition to being a successful athlete, author and speaker, Holm is a suicide prevention and mental health advocate.

“We’re very excited to have Jeremy as our speaker this year,” said Kristy Jones, Community Health Manager for McKay-Dee Hospital and NUHOPE Task Force chair. “He will help bring a tone of hope to the event, which will be a great start to the walk.”

In addition to Holm, local radio personality Bill Allred will host the walk. Allred is an avid supporter of suicide prevention efforts. 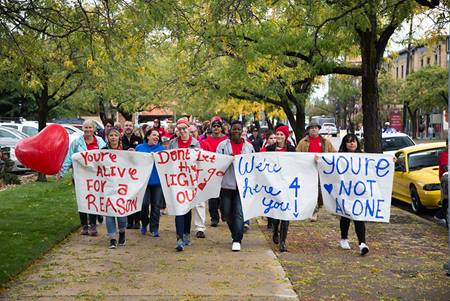 “The Hope Squads will play an important role in the Suicide Awareness Walk,” said Jones. “These students are a great example of suicide prevention efforts and partnerships in the community.”

Students from a number of schools’ Hope Squads will direct the walk while spreading messages of hope along the route.

Over the past ten years, NUHOPE has grown from a small group of concerned community members dedicated to preventing suicide in Ogden to one of Northern Utah’s most well-respected suicide prevention groups. About 300 people attended the walk ten years ago, compared to over 1,000 last year.

NUHOPE offers a number of free suicide prevention classes throughout the area. The group has been offering free Q.P.R. (Question Persuade Refer) classes to schools and community members since 2010. Since introducing the class, NUHOPE has taught the basic lifesaving technique to over 40,000 community members and students.

Other classes offered by NUHOPE and its partners include Working Minds, a suicide prevention class for workplaces, and ASIST, a two-day, interactive suicide intervention class. Those interested in scheduling a class may contact Kristy Jones at kristy.jones@imail.org.

Check-in for the walk begins at 9:00 a.m., Saturday, September 24 on the 200 block of 25th Street. Before and after the walk, representatives from local organizations will be distributing information and providing support. A light breakfast will be provided by McKay-Dee Hospital and water has been donated by Admiral Beverage (Pepsi).

Following the suicide awareness walk, the public is encouraged to stay downtown for the Harvest Moon Celebration, an end-of-summer party with family-friendly activities hosted by the Ogden Downtown Alliance.

Walkers are encouraged to register early at nuhopeutah.org/nuhope-walk. Registration is free and attendees will receive a NUHOPE Walk T-shirt while supplies last.