New Intermountain in Nevada My Health +
Lindsay Woolman May 18, 2017

Bob Petersen enjoys getting to know people. One of the things that sets him apart is he has a below-knee amputation on his left​ leg, but you’d never know this unless he wears shorts.

Bob works as an employee shuttle driver at McKay-Dee Hospital where he picks up staff and drops them off at the beginning and end of their work day. Over the years many employees have gotten to know him and have asked him to meet with patients who are fearful and need guidance on how to be successful with an amputation.

Bob's journey to thriving as a prosthetic user hasn't been easy, and he understands the challenges

When he contracted adult type 2 diabetes twenty years ago, he developed diabetic neuropathy and eventually had no feeling in his legs below the knee. In spite of this he could still walk and function normally. But Bob recalls the night when everything changed.

"I was walking across the carpet in a cabin where I was spending the night at a Boy Scout leadership training in Salt Lake City," says Bob. "I stepped on a staple lodged in the old carpet and I didn't feel a thing."

Three weeks later, his foot swelled up like a football

His foot was in such bad shape, the staple couldn't be found without an MRI. Because of this, Bob contracted a bone infection that spread like wildfire, making the next two years very difficult. He had a series of amputations on his toes and feet, weekly blood work, and visited LDS Hospital every day for months receiving hyperbaric oxygen therapy and wound care. Eventually he ended up in a wheelchair, but the bone infection still would not stop.​

Finally, Bob was so sick he says he was ready to die. As a last resort, he sought out an orthopedic surgeon who recommended a below-knee amputation to prevent losing the entire leg. Bob was so eager to move forward he scheduled surgery for the next day.

"As a result of the surgery the bone infection was completely gone," he recalls. "I realized I hadn't felt this good in years. Three months later I got my first prosthetic. I've never looked back."

Since then Bob has helped a handful of patients at McKay-Dee Hospital who are on the same journey and need someone to talk to. He consoled Kent Wimmer years ago, a McKay-Dee patient who also needed a below-knee amputation.

"It was very impactful to have him walk up and meet me in the hospital," Kent says. "I was getting ready to leave after surgery and I saw that Bob walked normal with a prosthetic. He heard my story, referred me where to get a prosthetic, and we became close friends. More than anything else he gave me hope."

Life with a prosthetic is active and busy 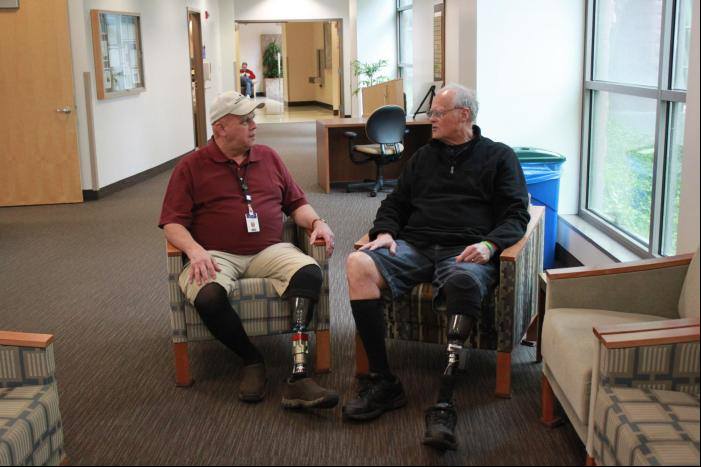 Both Bob and Kent enjoy going on walks— in fact Kent walks three times a week now — more than he used to walk before using a prosthetic! Since becoming an amputee, Kent has lost over 100 pounds and is committed to a healthy lifestyle. He attributes much of his changes to the hope that Bob gave him.

"Attitude and motivation to get started on the road to recovery are the keys when you're going through any trial," says Bob. "I've realized the only restrictions I have are the ones I put on myself."

Bob continues to meet with fellow amputees to this day. Staff say it makes a big difference for patients who need a prosthetic to see him in action. ​

RELATED: 5 Things to Know About Diabetes