Wes Pace, a 36-year-old cancer survivor from Utah, is living proof that there is always something to celebrate, and we can overcome a difficult year with the support of those around us — no matter what comes our way.

Pace and his family had some exciting plans for 2020. They had just purchased their first home in Lehi. However, just a few days after moving in, Pace started feeling sick. Thinking he had COVID, he got tested and decided to ride out the symptoms at home while he waited for his test results.

After receiving a negative result, he continued to get sicker. As his condition worsened over the next week, Pace, a type 1 diabetic with asthma, knew he needed to seek additional medical care. On Thursday, July 16, he scheduled a video visit with his primary care provider, Michael Gomez, PA-C,

After learning of his worsening symptoms, Gomez told Pace he needed to go to the ER immediately.

“My father-in-law dropped me off at the ER at Intermountain Medical Center in Murray, and I geared up for a few hours there,” said Pace. “I figured it would be a quick visit — they’d tell me I had COVID, and then they’d send me home.”

However, after running several tests, the doctors delivered the bad news: Pace didn’t have COVID-19, he had Acute Myeloid Leukemia (AML).
“My head just started spinning when they told me,” said Pace. “Initially, I just kept thinking ‘this can’t be right.’”

Pace was taken to LDS hospital by ambulance and immediately began receiving treatment. Because of the nature of his treatment and COVID-19 restrictions, he didn’t see his family — his wife and two sons, ages 6 and 11 — for 30 days. FaceTime calls and virtual visits allowed Pace to keep in contact with his family, but not being able to see them in person was extremely difficult.

“I got to LDS Hospital on July 16 and didn’t see my family for more than a month,” said Pace. “However, there’s a conference room on the eighth floor of the hospital that has a nice view of the sidewalk below. Family and friends would come visit and stand on that stretch of sidewalk so I could at least wave to them from the window.”

Beyond the FaceTime calls and sidewalk sightings with family and friends, Pace was buoyed up by his amazing care team.
“Sometimes you would get the same nurse multiple times,” said Pace. “They start to know you by name, and you start to build a relationship. Those connections really helped me make it through.” 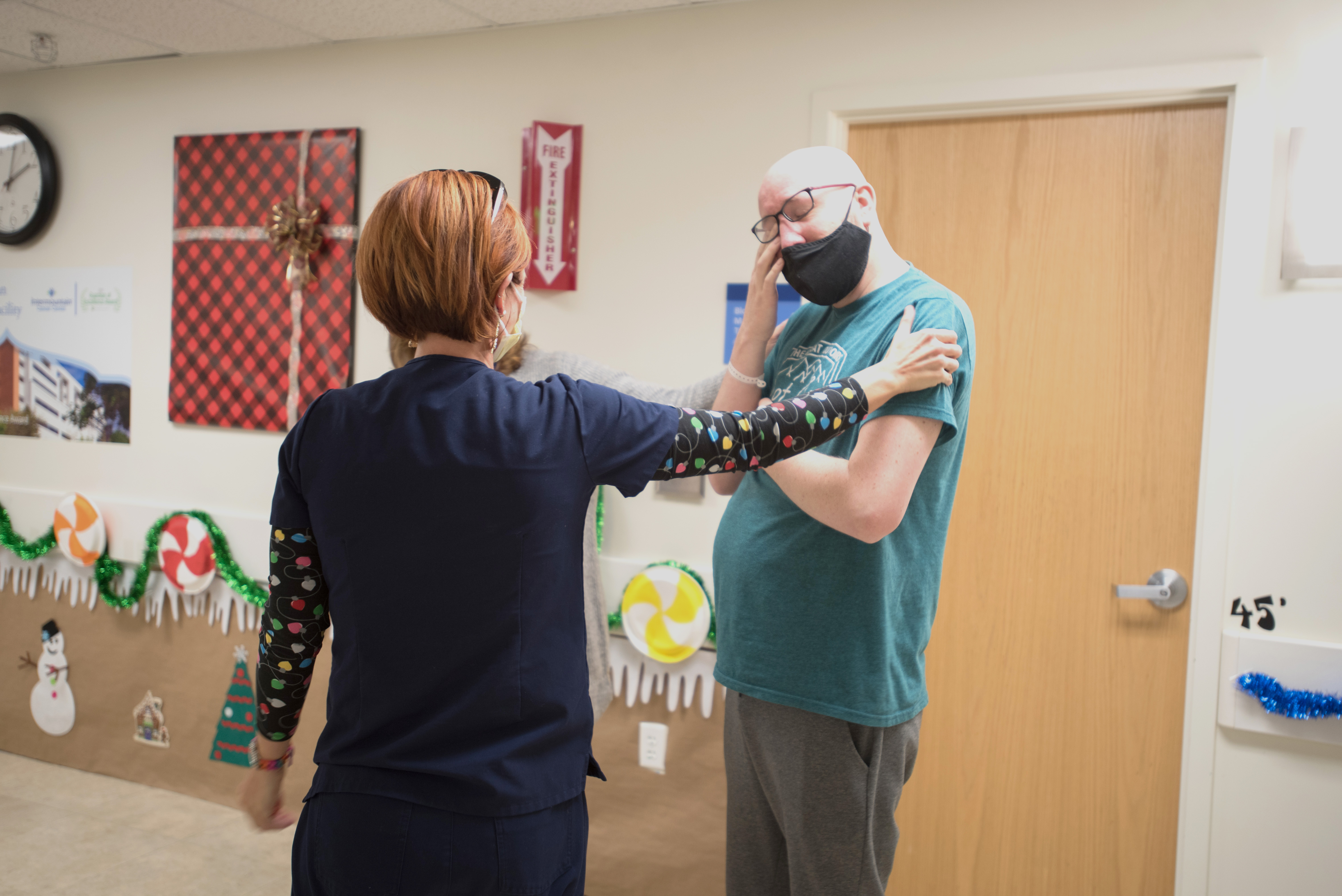 Beyond the personal interactions and individual support from his care team, Pace was impressed with the quality of care he received.

“The visit that put everything into motion was a scheduled video visit with my primary care provider,” said Pace. “Being able to visit with him virtually allowed me to get the help I needed right when I needed it without having to visit the clinic.”

Reliance on the latest research also made an impact on Pace’s experience.

“It’s impressive how much the team at LDS Hospital is continually gathering new data and research and creating new plans based on this new knowledge,” said Pace. “I completely understand why I was sent there for my treatment, and I know I have been given the best care I could possibly receive.” 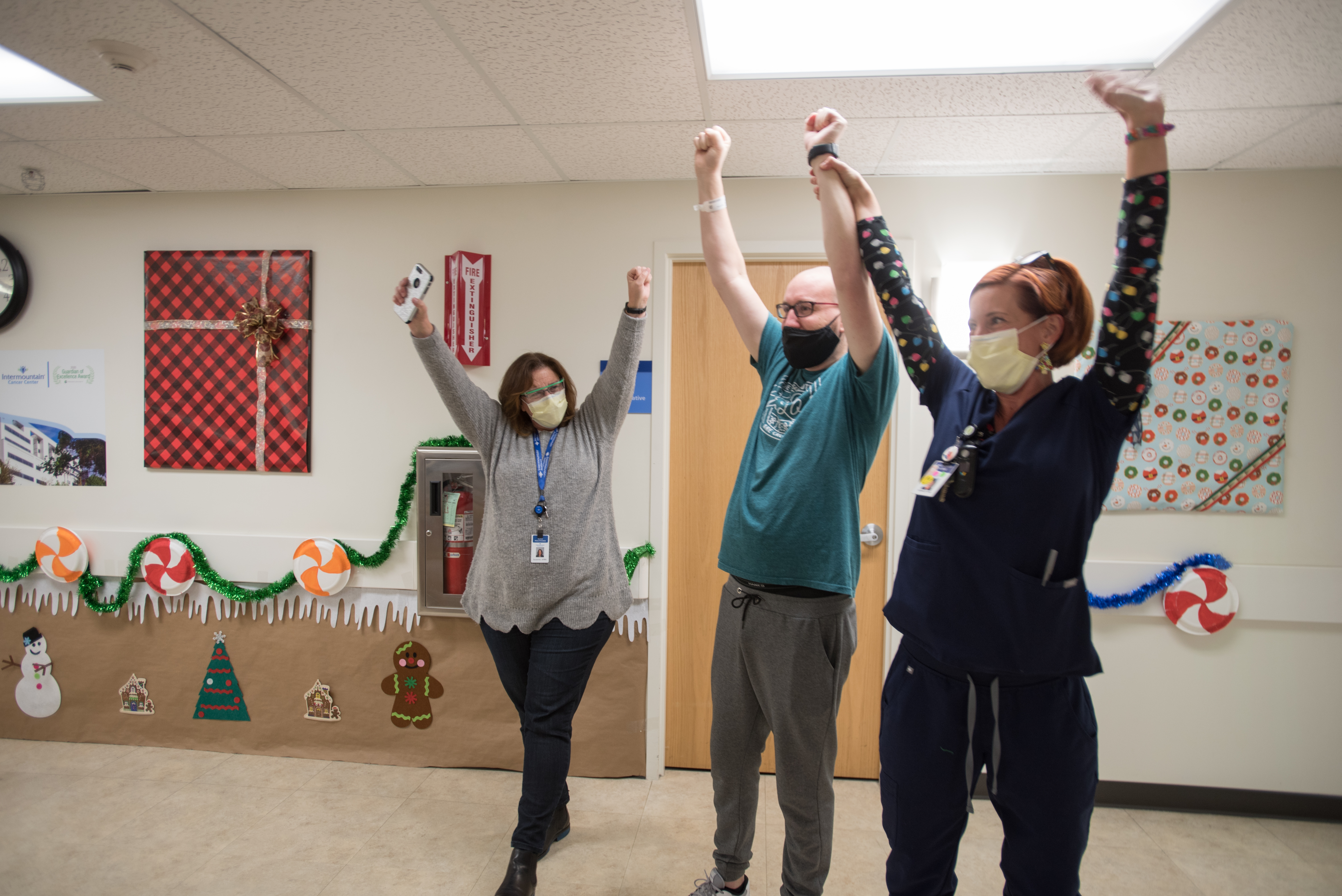 Pace is no stranger to an aggressive cancer treatment schedule, as his mother fought her own battle with cancer.

“About two and half weeks before I was diagnosed with leukemia, we learned that my mom’s breast cancer had returned,” said Pace. “I knew she didn’t have long, and I was able to spend some time with her between my treatments at the hospital.”

She passed away in September during one of Pace’s hospital stays, and an already difficult year became even more challenging for Pace and his family.

“Getting a cancer diagnosis and then seeing my mom lose her own battle with cancer a few months later has been a lot to take,” said Pace.

Pace and his family continue to grapple with the loss of his mother and the impact of his own diagnosis. After learning that he had cancer, Pace had to stop working immediately and apply for disability benefits.

I knew immediately after my diagnosis that I would have to stop working, and that we wouldn’t be able to afford our monthly mortgage payment,” said Pace.

Just five days after moving into their new home, and after being admitted to the hospital, Pace’s friends and family helped move his family’s belongings back to the home they were renting.

Although the year has been difficult, Pace has still found many reasons to be grateful. He had the opportunity to speak at his mom’s funeral and feel the support of his family and friends. Although his own cancer battle continues, and being in and out of the hospital is difficult, his body is responding well to treatment.

Pace finished his fourth and final round of treatment on Saturday, Dec. 12, 2020.

“When I went in for my last round of chemo, I started to think about how I wanted to celebrate,” said Pace. “I remember when my mom rang the cancer bell after she finished her first round of treatment three years ago, and I felt like I wanted to be able to do that too.”

Many cancer units have a bell that patients can ring when they end their treatment. It’s not only a way for them to mark the end of a difficult time in their lives, it’s also a small but significant way to publicly celebrate this milestone.

Pace was to be discharged from the 8th floor of the hospital — the same floor where he received treatment. However, after talking to the nurses on the unit, he learned that there wasn’t a cancer bell on the 8th floor.

This is when his care team went to work.

Rachel Beers, a transplant coordinator for the Blood and Marrow Transplant Program, knew there was a bell on the 7th floor outpatient unit. She coordinated with the staff on the 7th floor and arranged for Pace to be able to ring the bell as he was leaving the hospital after his final treatment. Although ringing a bell might seem like a small thing, for Pace, it meant the world.

“It was like the weight of the world was lifted off me when I rang that bell,” said Pace. “I hope that everyone gets to experience something like that when they finish such a hard experience.” 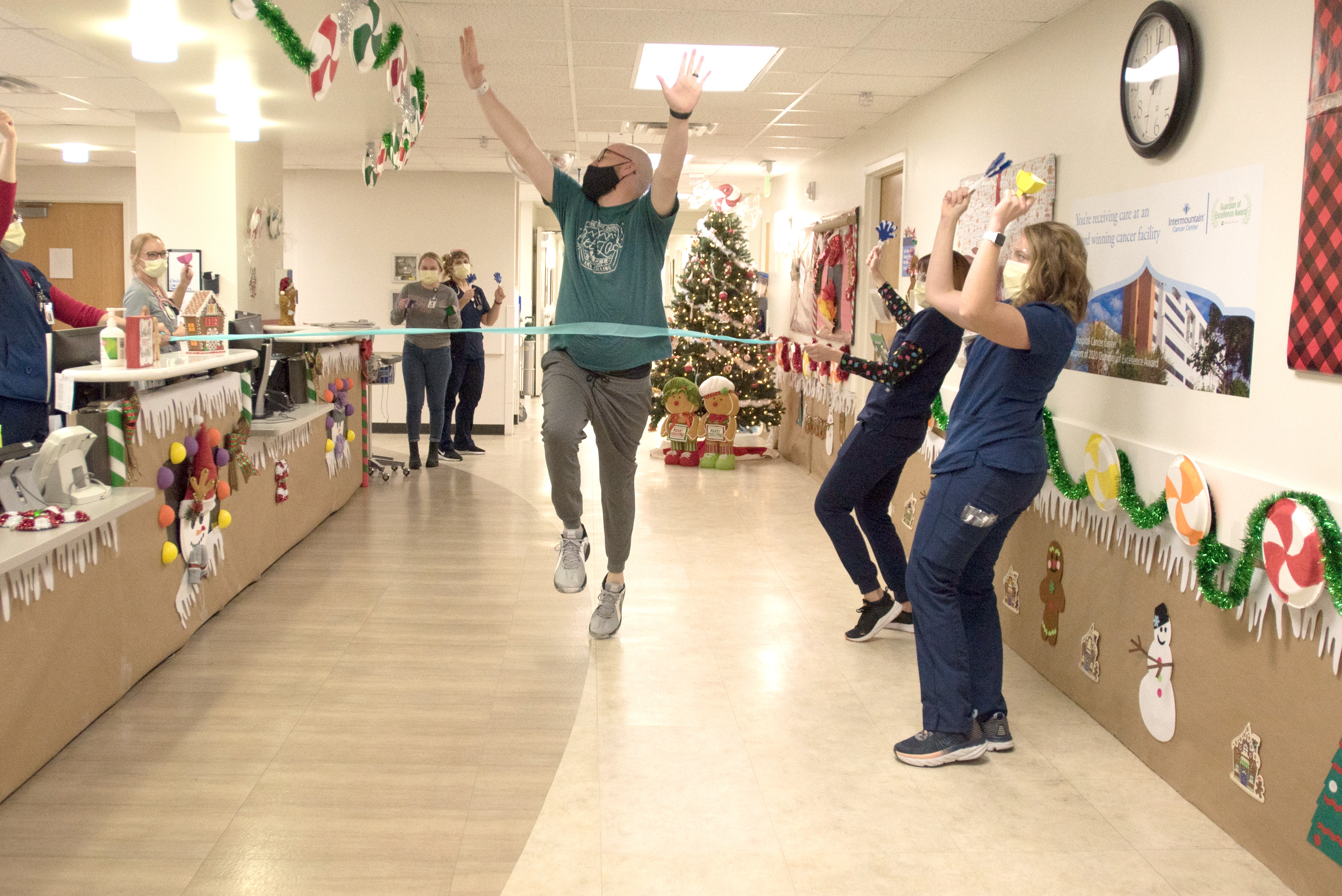 Despite the difficulties he has faced this year, Pace feels optimistic. He shared some words of encouragement for anyone who may be struggling with an overwhelming diagnosis or dealing with the loss of a loved one.

“Having been there, it’s easy to feel hopeless,” said Pace. “But you aren’t alone. I hope my story can help at least one person and help them know there is always hope for a bright future ahead.”