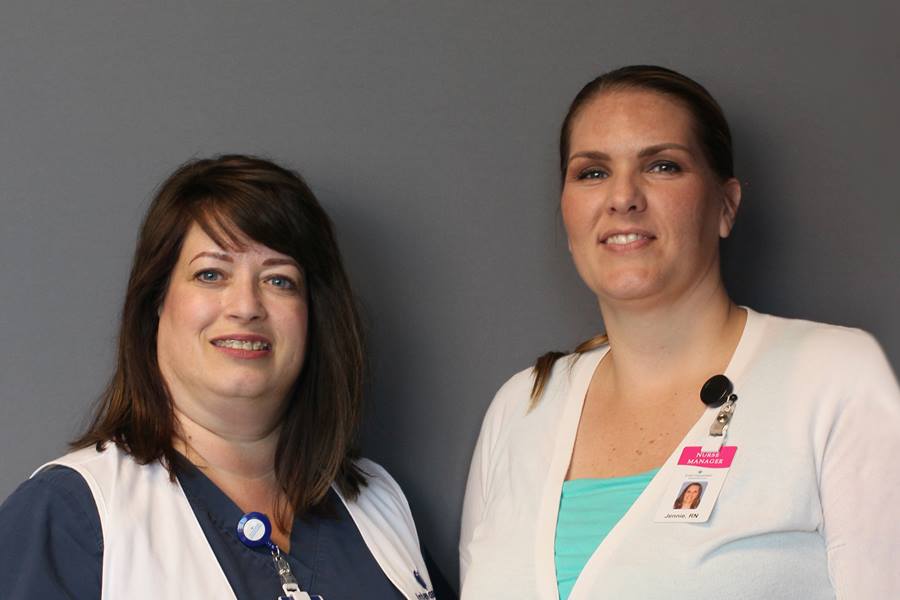 When a grumpy, 25-year-old jaw and throat cancer patient came in, nurse Sarah Larsen and her team made it their mission to be extra nice to him. After a few days, the patient opened up about the challenges he was going through. Sarah and fellow nurse Jennie Wilder discuss how they make a difference to difficult patients by trying to relate to them, regardless of their attitude.

Sarah Larsen: A guy came in, very high on I don't know what kind of drugs. We had him strapped to a gurney, and he actually stood up with the gurney on his back. He had so much strength, walking around with this gurney strapped to his back. The security guards didn't even know what to do with him.

What about you? You probably have some good ones.

Jennie Wilder: The thing that shocks our nurses most on a daily basis, something is happening where they're like, "Oh my gosh, I wasn't expecting that," and it's not critical thinking like medical care type stuff. It's social stuff, walking in on people doing things they're not supposed to do or hearing about their history and what kind of life they came from and not knowing how to react to other people's stories.

Sarah: I do remember a patient I had when I worked in oncology, and he was honestly the grumpiest, most ornery 25-year-old ever. And he had jaw and throat cancer.

He had surgery, and so his face was deformed. He had to have a feeding tube in; he couldn't eat. He was just really a jerk, like nobody wanted to take care of him. But he was there by himself. His family would never come in. One time he came in, and we all decided, whoever takes care of him, we are going to be so nice, disgustingly nice to him.

After a couple of days, he finally kind of opened up and told us how miserable he had been, and his family was blaming him because he had smoked, and all the things that he was going through. And you just realize that there is a reason why he was acting the way he is, and I've always kind of thought of that. I challenge myself when I have grumpy patients to kind of win them over. I love to do that because, usually, you can kind of get through to them with a sense of humor or whatever, and I like to try and be able to do that.

Jennie: Yeah. Those are my favorite type of patients. They're semi-grumpy, but you can make a difference by being yourself, helping them to be themselves, recognizing that things will get better in one way or another.