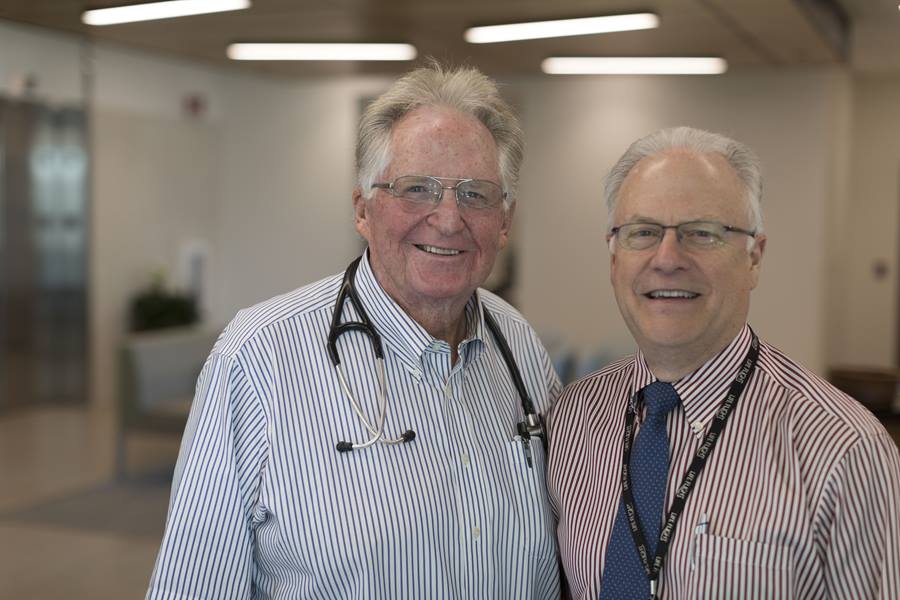 StoryCorps and Intermountain Healthcare partner to share conversations of hope and healing.

Over several decades serving as family medicine doctors, Drs. Steven Van Norman and Craig Booth have seen St. George, Utah, grow from a sleepy town with a small hospital to one of the fastest-growing metro areas in the nation with world-class health services. “I do miss the small hospital,” says Dr. Booth, “We’d go in on Tuesdays to do surgery, and there would be a beautiful lemon-cream pie waiting for us.

Craig Booth, MD: When I was in high school one of my best friends died on the football field, and I had the dubious distinction of trying to resuscitate him. It was a horrible experience because I didn't know what I was doing. He didn't make it. He was already dead before I got there. But it was one of the contributing causes to why I became a physician. There were other things that happened to me that made me want to not feel like that again when I came upon someone that needed drastic help.

Steven Van Norman, MD: You were the true general practitioner/family practitioner doing everything here. You delivered a lot of babies. Do you remember how many the total would be?

Dr. Booth: I delivered right around 2500 babies during the time that I was doing OB. One of the neat things is I was able to come back and do surgery with the doctor who delivered me. I think we have two or three members of our medical staff that I delivered. Anywhere in the community, it's fun to run into them.

Dr. Van Norman: Do you have a personal philosophy that you could share?

Dr. Booth: It's family, occupation, church or religious leanings, and personal things, and it's my feeling that the most well-rounded, the happiest people I've ever seen are those who give some time to all four of those areas. We're all familiar with people who give way too much time to their occupation. Nobody gives too much time to their family. But a lot of people give too much to their personal time, especially in this area. People in this area do a lot of things that end with “ing” like hunting, and fishing, and four-wheeling. So, they spend way too much time.

I don't think all those four areas need an equal amount of time, but they all need some time. If I have a regret during those 15 years that I delivered babies, it’s that I just couldn't get home to do family things. My kids talk about it today. They knew why I was busy. They accepted it at the time. We still left town a great deal especially, with the boat to Lake Powell or Gunlock or whatever, but it was never enough, and so I wish I had been able to spend more time with my family during their early years.

Dr. Van Norman: For most of our folks this is a calling, not just a job where you punch a clock. They are engaged and give a darn.

Dr. Booth: I do miss the small hospital. Back in those days, we had one operating room. We would go in on Tuesdays, my three partners and I, and do surgery. When we got through with the surgery, Mrs. Vodrey had a beautiful lemon cream pie for us to eat that was just incredibly delicious. That small town atmosphere and small hospital atmosphere is very difficult to forget.