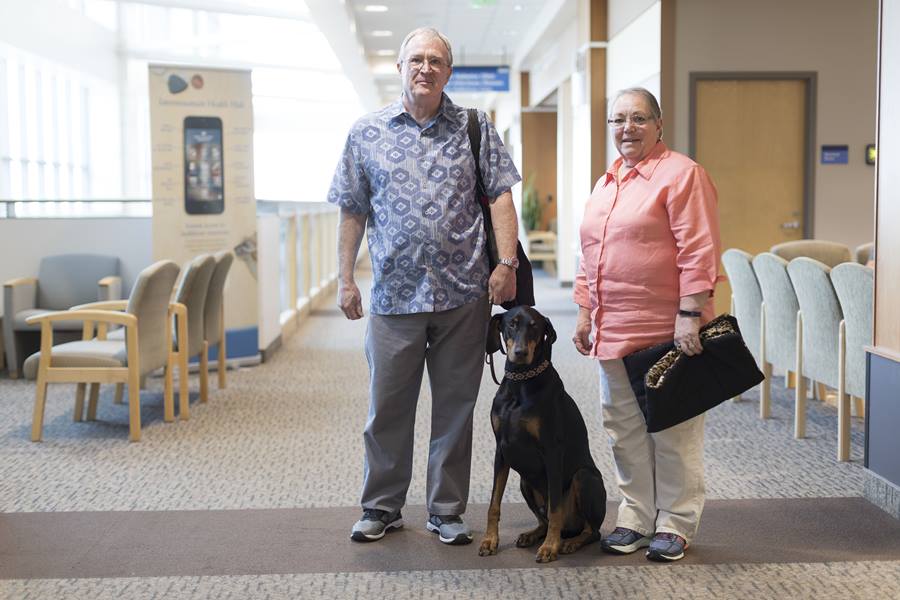 Patrick has spent the last eight years as a certified Intermountain therapy dog. He helps patients feel calm and at ease during their hospital stay. But his owners, Katie and Bob Elder, got their biggest surprise when an ICU doctor – after a long, stressful day – asked if Patrick could come visit to help her calm down from the day. She pulled Patrick in and just held onto him.

Katie Elder: It started way back years ago before there was really pet therapy. I had a black lab/shepherd cross that was exceptional with kids, and I had walked her over to my workplace. It was an elementary school for kids with disabilities, and they had a preschool. One of the little kids had had a meltdown. He had autism, and he was screaming and yelling and hurting himself, and he saw the dog walk past the window and stopped crying and screaming and yelled, "Doggie!"

One of the teachers came out. She knew me and asked if the dog would be okay to come into the classroom for a few minutes. The dog immediately dropped down into a crawl, squeezed up against this little kid. He's about three and a half years old. She rolled over on her side with her back up against him, and he immediately stopped crying, stopped screaming, wrapped his arms around her, laid his head down on top of her head, and started humming and rocking and saying, "Doggie, doggie, doggie, doggie." After about five minutes and he had calmed down, they made him a deal that when he felt anxious, if he would stay quiet for five minutes, they would get the dog to come back, and he could play with the dog. So for the rest of the school year, I spent my time leaving the classroom, running to my house, which was a few houses away, grabbing the dog, and bringing him back as fast as I could so that this little guy could lay on him and hold him for a few minutes.

I was hooked from the very beginning. But then we went about raising our kids and having our careers. I was just about ready to retire, and the kids were off on their own, so we signed up with the Intermountain therapy animals and certified Patrick and have been doing it for about seven, eight years now.

Bob Elder: Through the help of Intermountain therapy animals, we were able to start him working in a migrant worker preschool, and he proved to be so exceptional with those little kids that we thought we have really hit the nail on the head here with him.

Katie: That's where we taught him to give a kiss. They would come up to him, get a kiss, and give him a treat. As we're walking down the hall, I'm hearing one little kid just cry and cry. The teacher came running out, she goes, "Can you bring him back for a minute? He didn't get to give him a kiss, and he's really upset, and he's decided he really wants to try it. He had been too afraid to try it." I told Pat to sit, and the little kid walks up to him, and he was literally shaking, and he doubled up his fists, he sticks his chin out, puckers up his lips, and Pat leaned forward and gently just touched his chin. The little kid was so happy, and after that, every week that we went, the first thing they did was line up in a line, and they would get a kiss from Patrick.

Bob: We currently work at Logan Regional Hospital with Patrick. One of the best stories was we had finished a long day of visits, and one of the doctors had asked if we could bring Patrick up. She was on the intensive care floor, and she said, "It has been a stressful morning. We were swamped with people that are having problems. I've gotta have a dog fix." She crawled underneath her desk, pulled Patrick in with her. He laid down next to her. She hugged him, and she held onto him.

Katie: She said, "This is what I needed. I can feel my blood pressure dropping, and my heart rate is dropping." She goes, "I think I'll be okay for the rest of the day."